Learn about the underlying need for and goals of SHPA.

The percentages of Native American youth who still remain over-represented or misidentified with special education needs or underserved in general education remains completely unacceptable across the nation (Civil Rights Project, 2007).

Native American youth leave schools at rates far higher than other groups, complete higher education at far lower rates, and attend class with teachers who understand far less about them in general than about other students.

The poverty that exists on reservations is inter-generational, which puts those students at a greater risk for having developmental delays, being abused or neglected, experiencing teen pregnancy and dropping-out of school.

To begin to address these needs in school counseling and psychology, identifying specific weaknesses or gaps in service in those professions helps frame the potential solution. Culturally competent service, specifically culture-specific competence with Native American youth, addressing 21st century skills to enhance access (including technological) and readiness, and working from strengths rather than deficits comprise three such gaps.

Finally, addressing the tremendous ongoing shortage of personnel, especially those with strong professional preparation that will begin to close these gaps, is critical. 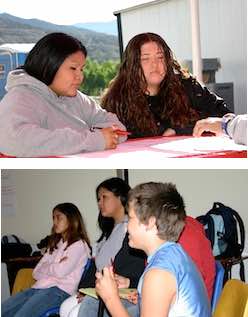 Objective 3, assessing the outcomes of our work, will contribute significantly to the validity of the design, support future differences in training, and enhance dissemination efforts. We assesses both the youth served at project sites, and the graduate students once they have completed the project and are in the field.

What is the real cost of one Indian child misdiagnosed or under-served? What is the cost of parents and communities in poverty continuing to believe that they are not welcomed, understood, or able to become valued members of society?

The societal costs are enormous, seen not only in tragically missed opportunities, but in actual costs of incarceration and welfare.

This project contributes to beginning to change that picture. Nationally approved graduate training takes 4 years for each school psychologist and 2 years for school counselors.

SHPA has a goal to graduate 24 fully trained pre-service professionals who will have influenced each of their cohorts with new information and who will serve new schools with Native populations over the next 20 years. The 24 scholars will serve thousands of students over the course of their careers, most of whom will be Native youth from poverty-stricken communities.